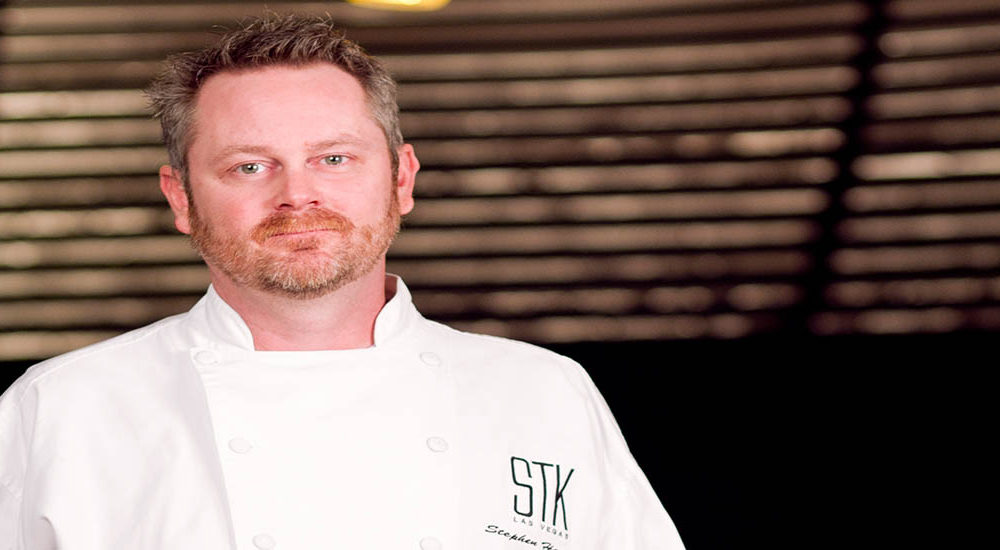 We all know how much celebs love Las Vegas (and non-celebs, too, obviously), but what’s it like to be a celebrity chef at one of the hottest restaurants in Sin City? We sat down for an exclusive interview with Chef Stephen Hopcraft, Executive Chef at STK Las Vegas, and former competitor on Bravo’s hit series Top Chef.

What do you think inspired you to be a chef?

I started working in restaurants when I was 14 years old and after high school I went to Los Angeles, California with plans to become a sculptor. Throughout school I cooked and somewhere along the line, I starting reading a culinary arts book which Charlie Trotter was featured in.

At the time, I was working two jobs cooking and I made the realization that, “Wow, maybe I’m already in the art I want to be in.” I was around 19 years old when I saw that kind of artistic food. Because I had never seen that type of food before, I felt extremely inspired. You didn’t have culinary cooking shows at all at that time – maybe on the PBS channel, but I think that was about it.

The point is, that once I saw what you could do with food, it just really blew my mind. That’s what piqued my interest and made me want to go to culinary school, which I did in San Francisco at the California Culinary Academy.

After I graduated, I actually did go and work for Charlie Trotter. It was pretty awesome. He truly inspired me and it was my dream to go work with him. The fact that I was able to is incredibly awesome. I think that’s what inspired me to be a chef.

My cooking philosophy is, it’s a team sport.

Tell me about your cooking philosophy?

My cooking philosophy is, it’s a team sport. I like for everyone to come together in the kitchen and I also think cooking professionally feels like a sport as far as timing and making sure everything comes together at the right moment.

Also, integrity, which is something that matters when no one else is looking. When you’re cooking for somebody, you must take it very seriously and have the integrity. I think that having your team come together to produce something that’s consistent, tastes great and is done right takes a lot of that ‘team sport-style’ energy, and that’s kind of my philosophy. 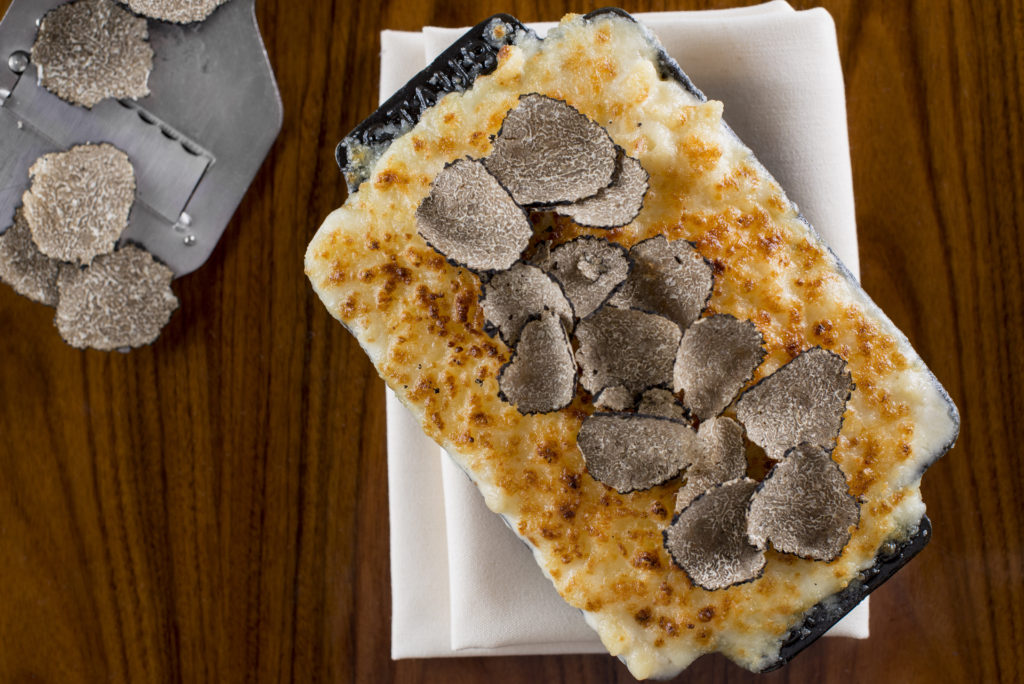 What’s the most rewarding part about being a chef in Las Vegas?

The camaraderie in this town is extremely rewarding and inspiring. Also, the number of guests and the excitement that this town brews. People come out here and they’re really ready to go all out. They’re willing to get out of their comfort zone more than they would in their hometown or any other average vacation spot because that’s just the reputation in Vegas… You go bigger, you go harder, and try and forget about it as soon as possible before you get on the plane (or at least by the time you get off the plane).

What’s the biggest risk you’ve taken as a chef thus far in Vegas?

Becoming the Executive Chef at STK was a really large risk for me, at the time. When it opened, it was a brand new concept and something really different – we did not have a guarantee that it would be embraced by the Las Vegas community and by visitors. Looking back at it now, I feel like STK Las Vegas has become more successful than the owners or I could have ever dreamed of when we first went into it.

Before STK, I was at the MGM Grand and I was working for Michael Mina, who I had worked with for many, many years – since back in the early ’90s. So that was kind of a comfort zone for me. To take a step away from that and do something totally different in a brand-new hotel that no one’s even seen, and with a brand I knew nothing about – that, I think, was what made it feel like such a plunge. But as the saying goes, things aren’t going to take off for you if you don’t take any risks.

What is your most memorable cooking experience in Las Vegas?

My most memorable moments in the kitchen were when we first opened STK at The Cosmopolitan of Las Vegas. The first week we expected to do around 300 covers a night, and in reality, the first week we were doing upwards of 800 covers a night. We had a night where we had Scott Contant from Scarpetta, we had José Andrés, and this room was filled with a lot of hugely influential chefs. I’d say that that was the most intense and very memorable psychological experience. José Andrés actually kicked me off of Top Chef, so he sent compliments back to the kitchen. I came out and was like, “Hey,” and we ended up laughing about it. 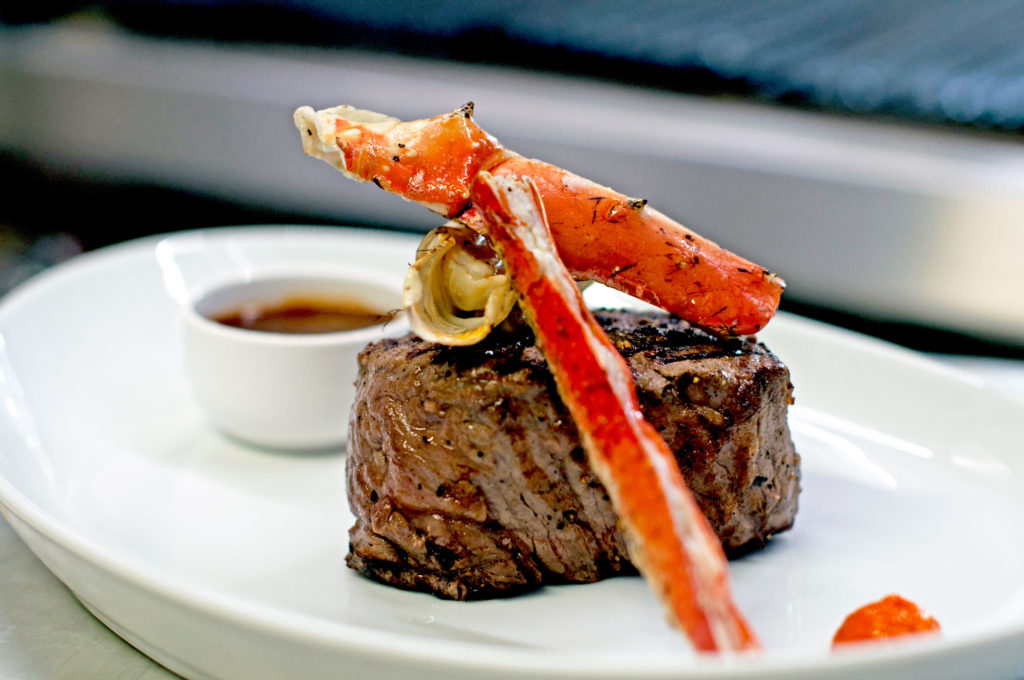 What’s the hardest celebrity palate that you’ve ever catered to?

I would never single somebody out as a celebrity because they’re my guest, just like all those who visit us at STK. I personally enjoy when someone may have a distinct palate or dietary needs because it’s a challenge. A lot of people tend to get angry or upset about it, but I try to see it as an opportunity to do something different. I’m sure that they’re used to getting fed steamed vegetables at a restaurant. I want to do more than that, and I always try and put together something cool with whatever ingredients we have available in the kitchen at the time that work for that person’s needs. I’ve definitely done of-the-moment dishes and ended up turning them into menu items before. Those moments are exciting. It really gets you in a creative mindset, and that’s how I work best I think.

What are your biggest hopes when it comes to just staying ahead of the culinary curve in Vegas?

My style isn’t necessarily trying to reinvent the wheel or come up with an extravagant dish that has ingredients that you’ve never heard of. I’m not really into foams and making caviar using chemicals or that sort of stuff. Personally, I’m more about executing great flavors precisely and distinctly, and still delivering something that’s an over-the-top memorable meal with high value.

Is there any fear that ever occur when creating a dish in the kitchen?

Any time that you create something, there’s always going to be some second-guessing yourself. There’s always that element that comes with creativity. Because creativity comes from within, when you show it to people it’s really easy for someone else to pick it apart and be critical of it. There’s always that type of fear when developing a new dish, but again, I have a philosophy of flavors that I like to stick to with my cooking and I always stand behind it.

Do you feel like where you come from influences that straight shooter, you want to impress …

Because I’m Midwestern? Yeah, absolutely. I grew up in Cleveland, Ohio and there wasn’t a lot of varied cuisines that I was exposed to growing up. I don’t think I tried sushi until I moved to the West Coast. Even Chinese food or Mexican food was a stretch out there. Straightforward “meat and potatoes”-type cooking was the way pretty much everything was. As my palate grew and I started working in more interesting places and began learning more and more about food I began working with new flavors, but I still do bring some of that “meat and potatoes” sensibilities along with me I suppose.

I did learn to cook in San Francisco. Seafood and Asian ingredients heavily influence me. I guess there’s still some Midwestern “straight shooter” in me, though.

I think the tradition of food is very important, especially if you want to be creative. You can’t build upon something if you don’t know the original building blocks. I think it’s very important to know the “mother sauces” and know the basics of cooking and why things work together, the regionalism of it, the seasonality of it. Those are very important things that you can’t really stray far from, in my opinion, and still come up with something good. I value and appreciate seasonality and regionalism when it comes to food. 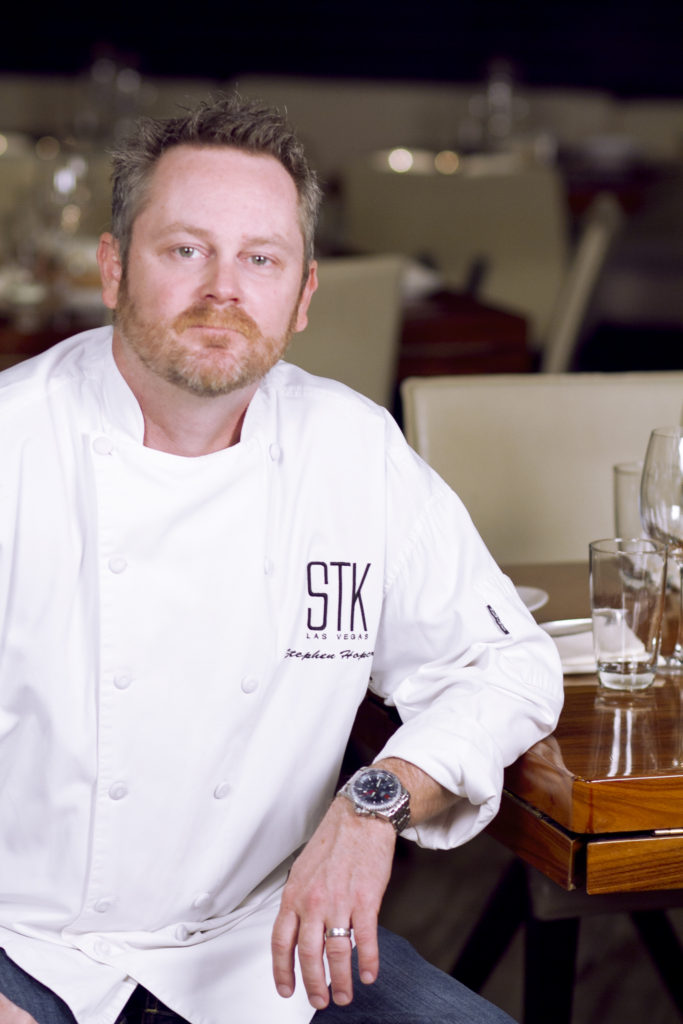 We decided to bring you some tips… from how to cook steak to what ingredient is a must-have for Chef Stephen of STK.

Do you have one favorite ingredient that you always come back to?

In the summer, I am drawn to watermelon, sweet corn, I want stuff like that when I’m cooking. In the fall, butternut squash and other gourds are really great to use and incorporate. During winter, go for wintergreens or beets. All the wonderful peas and beans that come out in the spring really get me excited during that time of year. Those are the go-to ingredients, the ones that are really popping off the bush.

Are there any misconceptions about steak?

I think that steak temperatures are misconceived a lot of times. There’s no such thing as ‘medium plus’ or ‘rare plus’ or ‘mid-rare plus.’ So when ordering steak, people, please use those four temperatures.

Do you have any tips for those cooking steak?

Start with a hot pan, a hot grill, a hot broiler – basically, whatever you’re cooking on, make sure it’s extremely hot to fire the steak. Season the steak well (salt and pepper) before you cook it, and let it sit out before you cook it. The closer it comes to room temperature the better, so as not to shock the meat when you throw it in the broiler or on the grill.

Once you cook it to your desired temperature, or a little bit less, you pull it off your cooking surface and let it rest for almost as long as you cooked it. This is very important for the juices to redistribute throughout the steak and is one that often gets overlooked, simply because it requires a little bit of patience and wait time. That’s why sometimes even though a steak may look mid-rare in the center, once you cut into that, it will still come across as dry because it wasn’t properly rested and the juices will run out of the steak. 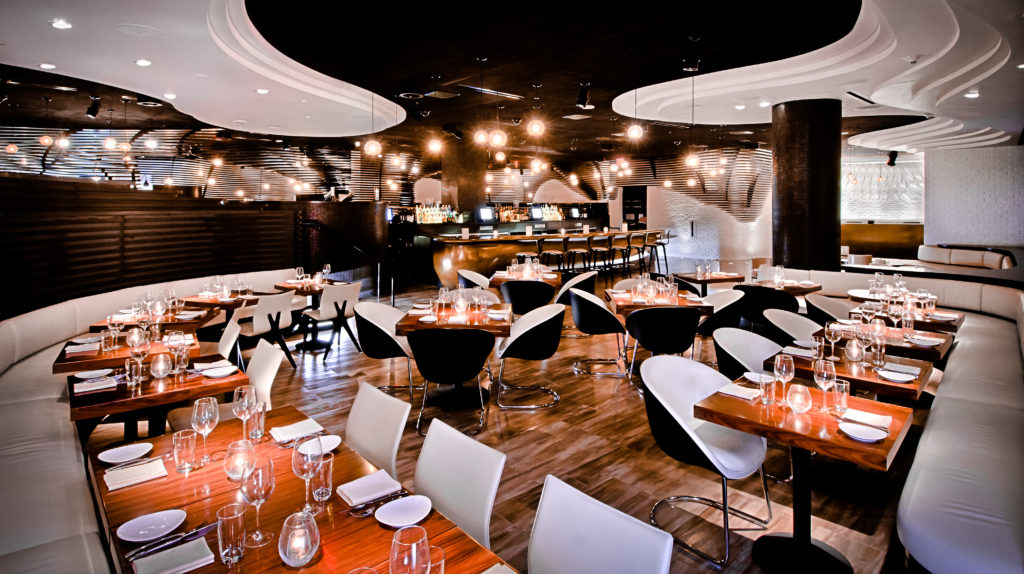 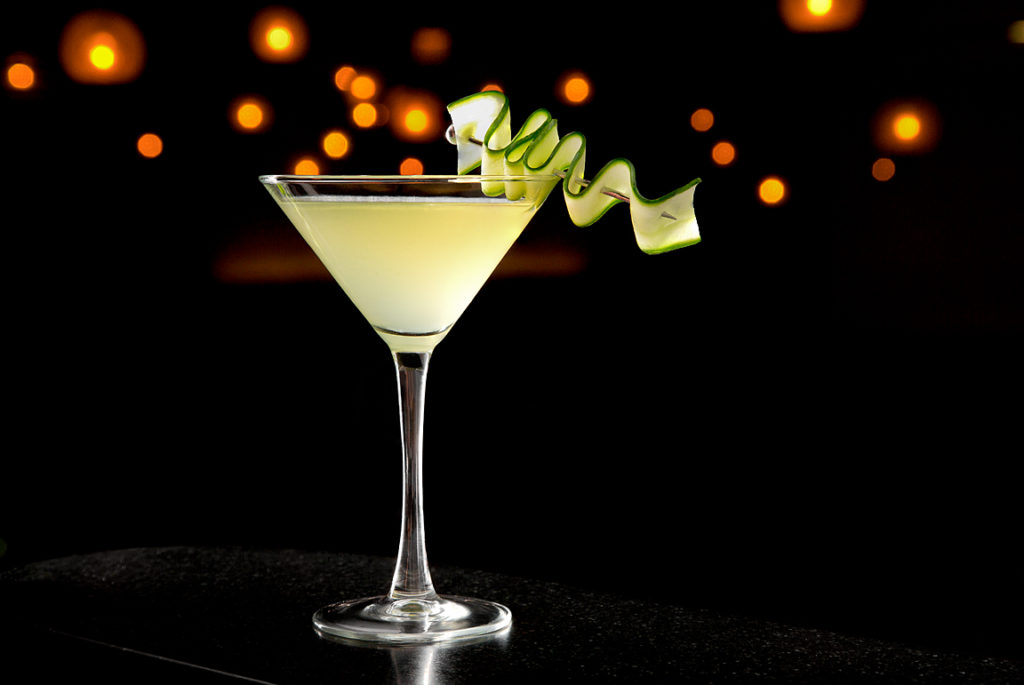