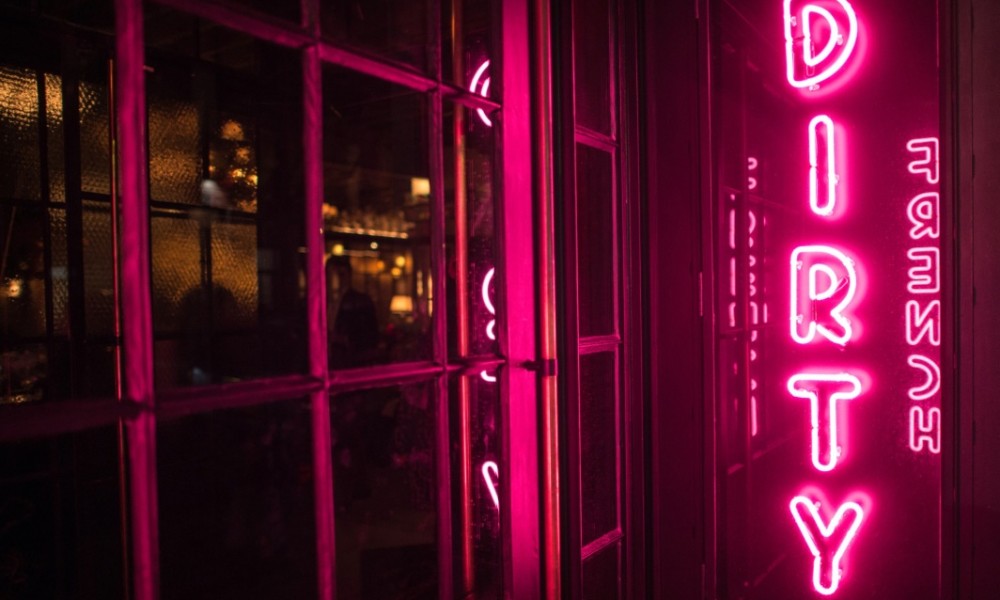 Footwear fanatics won’t be able to keep their eyes off the floor when dining at fancy NYC restaurant Dirty French, where the entire staff rocks Air Jordans.

Dirty French, located in The Ludlow hotel, at 180 Ludlow St, is the brainchild of the Major Food Group, a New York-based restaurant and hospitality company founded by Mario Carbone, Rich Torrisi, and Jeff Zalaznick. The team established seven successful restaurants including Carbone and ZZ’s Clam bar.

Zalaznick initiated the concept which was inspired by his Michael Jordan obsession. “It was always a dream of mine to open a restaurant where the whole staff wore Jordans,”  Zalaznick told First We Feast. “It [finally] made sense at Dirty French because the restaurant has an ‘80s theme, and that was the decade when Jordan started making shoes and sneakers started to become a big part of culture.”

Zalaznick, who has two large storage facilities filled with sneakers in dead-stock condition, supplies the kicks to the employees, who follow a strict maintenance system.

The shoes are to be thoroughly cleaned on a regular basis and checked in and out before each shift. After a year of service, the staff members receive a pair as a gift.

Zalaznick tasted the fruit of his labor when the ultimate VIP, MJ, who is a famous foodie himself, visited Dirty French. Jordan is a partner at Cornerstone Restaurant Group, which founded the Michael Jordan’s Steak House in multiple locations and other reputable restaurants.

At the end of the meal, Zalaznick approached the table to inquire their experience.

“I love the food,” His Airness reportedly said. “But it’s got to be the shoes.”

The New York restaurant takes its culinary prompts from the classic French bistros and reinvented the signature dishes with less traditional but more flavorful ingredients such as za’atar and harissa.

First We Feast- Article and Photos

Kicks // At #DirtyFrench restaurant located in NYC’s #LudlowHotel, part of the staff’s uniform are Jordan sneakers, as provided by owner #JeffZalaznick who is an admitted MJ obsessive. Staff who stay with the restaurant for at least a year are gifted a pair. Which Jordan silhouette would YOU request to serve in? Image shot by #andyhur for @firstwefeast #snobettesneakers

Some awesome pics from the Dirty French Air Jordan Shoot! Can’t believe that jazz split actually made it to “print!” #dirtyfrench #airjordan7 #ballerstatus A photo posted by Emily (@eepstein713) on Nov 12, 2015 at 11:34am PST

And then things got pretty serious over at #dirtyfrench last night… Thanks for the vino @clairepaparazzo! #LES #newyork #jamon #katturnerwashere #vscocam A photo posted by ⚡️Kat Turner⚡️ (@katturnerwashere) on Nov 12, 2015 at 8:08am PST

My awesome #BloodyMary from yesterday’s #Brunch #DirtyFrench A photo posted by Asli Hamamci (@ahamamci) on Nov 2, 2015 at 9:32am PST