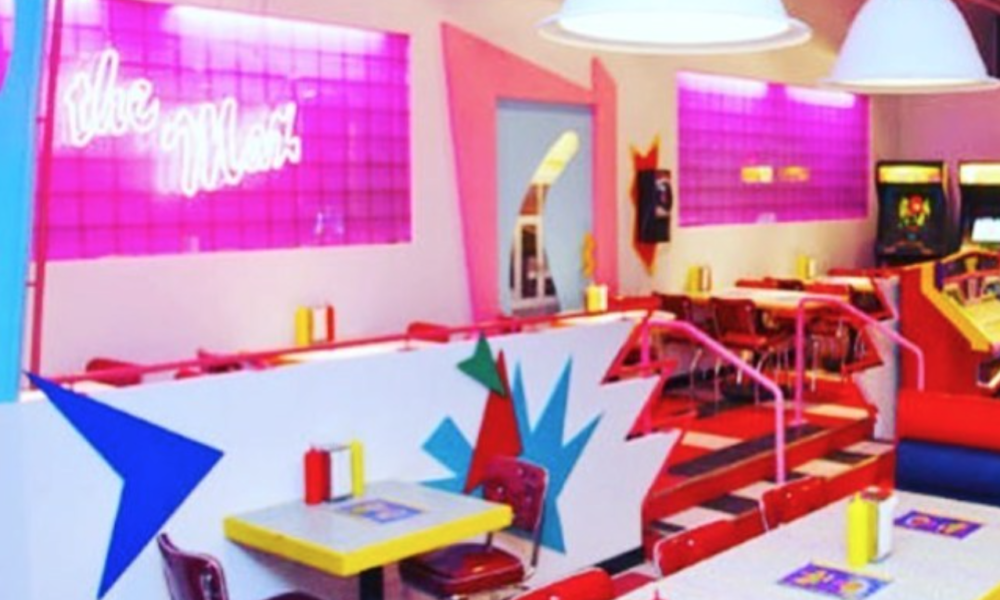 Last week we took it back to the 80’s and talked about the Golden Girls themed café, Rue La Rue, opening in NYC this September.

For this week, let’s fast-forward it to the 1990’s. If I say, “babes, books, and Belding,” what hit television show come to mind? If you’re still stuck does “Bayside High” ring a bell? Introducing Saved By The Max – the first ever Saved By The Bell Pop Up Diner, which opened June 1st in the neighborhood of Wicker Park, Chicago. This diner experience was only supposed to be for one month, but since it’s been so popular, they’ve decided to extend their service all the way to the end of the year.

Why this might be nostalgic to some, I’m sure there are a few of you who don’t know what I’m talking about, so, here’s your recap.

Clearly #pink was a thing #savedbythebell

Saved By The Bell, aired from 1989 to 1993 and was a hit television show on NBC. It was about a group of friends in high school and their principal, Mr. Belding. The sitcom consisted of lighthearted situations mixed with serious social issues like, drug use, death, remarriage, homelessness and even driving under the influence. The actors consisted of Mark-Paul Gossealaar, Dustin Diamond, Lark Voorhies, Dennis Haskins, Tiffani-Amber Thiessan, Elizabeth Barkley and Mario Lopez. After the seasons had concluded, it then started two spin-off series. The first one was Saved By The Bell: The College Years (1993-1994), which followed the original cast to college, and the second was with the new class of Bayside High, Saved By The Bell: The New Class (1993-2000).

Throughout the show, there was one spot that was the local campus hangout for the students of Bayside High, which was called The Max. This was where serious talks would occur or where the Bayside Tigers would go to celebrate before and after the games. The owner of the diner was a magician called Max, who appeared throughout all of the Saved By The Bells.

Now that you know a little about the show, it is time to get you up to speed on how Saved By The Max, came to be and what exactly is it.

Former Beauty Bar event coordinator and DJ, Derek Berry posted a Facebook event page, as a joke back in February, wanting to pay respect to The Max. The joke soon became a reality as, unexpectedly, thousands of fans on Facebook showed support for the endeavor.

After some planning and hard work, Saved To The Max is now open for business. If you loved watching this show growing up and ever wanted to meet Max the magician, Ed Alonzo, here’s your chance! Alonzo has been at the diner on 1941 West North Ave greeting guests as they arrive, and promoting the diner.

#TBT Opening Night at Saved By The Max with none other than special guest host MAX himself!

The best part of this experience – the whole diner is from the actual set of Saved By The Bell. I MEAN…EVERYTHING! From the authentic restaurant layout with the staircase, doors, payphone, and tiling. They even have the famous booth where so many crucial conversations occurred and to put a cherry on top, Kelly’s locker is there right when you first walk in.

Were so excited to see you! We WILL be accepting limited walk ins tonight! Dinner starts at 5pm ?

Tickets, which you can purchase here: https://savedbythemax.tocktix.com/ – /home, are going for $35 per person, and it includes an appetizer, entrée, and dessert. Reservations are required, and you would need to book in advance since it’s been sold out for the whole month of June. It is, however, first come first serve for brunch and anytime after 11 pm – 3 am.

How’s the food? Well, hold on to your seats because you might be a little blown away with whom the cook is. Former Michelin-Starred, Schwa chef, Brian Fisher. He never thought he’d be in charge of food at a 1990s nostalgia pop up diner, and although Fisher is not quite sure how his name surfaced as a candidate, he’s happy he’s there. Food items include Tori’s Friend Chicken, AC Sliders, Mac & Screech, Bayside Burger, Belding Fries, Lisa Turtle Milkshake and Preppy BLT.

The late night events will include 80s VS 90s nights, trivia challenges, an in-house band called The Zach-Attack and TV-oke. (That’s karaoke, television style.) Many customers that have already attended this pop-up joint has written that things such as, “this was without-a-doubt the most fun I’ve ever had from a dining experience.”

The food is Michelin-star worth, the atmosphere is like taking a trip down memory lane, and the experience is beyond fun. This place is truly, Saved By The Bell! Next time you’re in the windy city, or in the neighborhood of Wicker Park, you have to put Saved By The Max as a stop.

Bayside High! Tickets for July and August dinner is now on sale at savedbythemax.com!!!

PS- Fellow New Yorkers, brace yourselves. Derek Berry seems to like these classic American sitcom-turned-restaurants since there is talk that he might open a Monk Café, after the show Seinfeld. Stay tuned!

DoubleTree by Hilton has released its signature chocolate chip cookie recipe for the first time ever! For more than 50 years, DoubleTree has welcomed their ...