PB&J’s at the Emmy’s? Thanks Jimmy Kimmel 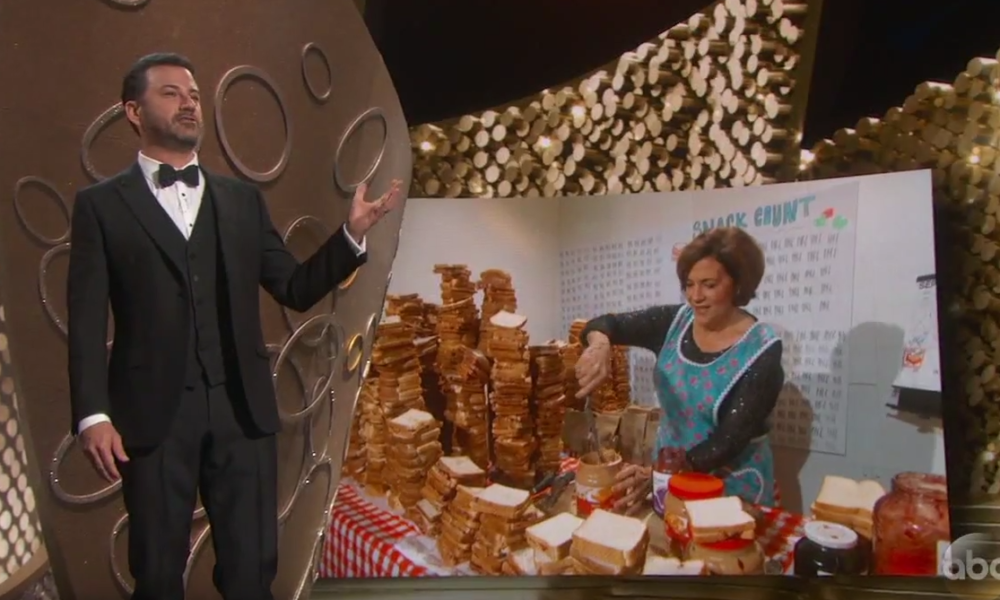 As you may or may not know, the 68th Annual Emmy Awards took place over the weekend. Comedian Jimmy Kimmel hosted this year’s award ceremony, so viewers were preparing themselves for a funny show.

The worst part of hosting the #Emmys is laying down all the carpet.

Kimmel gave us a few good chuckles when the kids from the new Netflix’s hit, Stranger Things, gave out peanut butter and jelly sandwiches to the audience. Millie Bobby Brow, Caleb McLaughlin and Gaten Matarazzo, went around on their bicycles and distributed the sandwiches among the star studded crowd. Inside the brown paper bag, each PB&J came with an apple juice box and a cookie.

All I want in life is a peanut butter and jelly sandwich delivered by the cast of @Stranger_Things. #Emmys pic.twitter.com/7bsdu5SK2t

A photo posted by Caleb McLaughlin (@therealcalebmclaughlin) on Sep 18, 2016 at 6:59pm PDT

Such an honor to be invited to the Emmy’s 2016 and meet so many amazing people best day ever!!! ? @therealcalebmclaughlin @gatenm123 @netflix @strangerthingstv ❤️ #feelingblessed?

The host told the audience at Los Angeles Microsoft Theater that, “I know these shows are long and I know a lot of you haven’t eaten since Labor Day, so I have a little surprise for everyone.”

Jimmy’s mom, Joan, made over 7,000 sandwiches and still making them backstage during the show

Inside each lunch bag there was a surprise hand written note from Kimmel’s mom, which read, “Have fun tonight! Win or lose, your mom will always love you. Don’t get drunk. Xoxoxo Joan (Jimmy’s mom).”

Yep. I got one. Thank you @jimmykimmel ‘s Mom. #Emmys

Modern Family star, Sofia Vergara, literally couldn’t wait to eat her snack. After securing one for herself, without skipping a beat, started eating and chased it with an apple juice box.

Co-star, Rico Rodriguez, amongst other actors, snapped a picture with their treats. Some even thanked Jimmy’s mom for the delicious snack.

Someone liked the sandwich pic.twitter.com/pMQBictUvF

This might have topped Ellen DeGeneres, when she hosted the Emmy’s in 2014 and had pizza delivered to the hungry A-list crowd.

Wonder what food the 2017 host will bring out to the table.